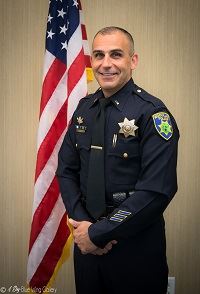 Lieutenant Anthony Cucchi, Patrol Bureau Commander, joined the Woodland Police Department as a patrol officer on June 24, 1998, one week after graduating from the Sacramento Public Safety Center Basic Police Academy. Lieutenant Cucchi has had assignments in Patrol; as a School Resource Officer; Bike Patrol and as assistant team leader on the SWAT team from 2001 to 2009.

He has been awarded with the 10851 pin and the Distinguished Unit Award with SWAT. He was appointed to Corporal in January 2006 and promoted to Sergeant in July 2006. Lieutenant Cucchi received a Bachelor of Arts Degree in Organizational Leadership at St. Mary's College in Moraga.

Lieutenant Cucchi is currently assigned to the Patrol Bureau.

He has also served in the United States Army with assignments in:

He was honorably discharged in March 1997.