1029.     Conviction of a felony as disqualification for peace officer:

1. Any person who has been convicted of a felony in this state or any other state.

2. Any person who has been convicted of any offense in any other state, which would have been a felony in committed in this state.

3. Any person who has been charged with a felony and adjudged by a superior court to be mentally incompetent  under Chapter 6 (commencing with Section 1367)    of Title 10 of Part 2 of the Penal Code.

4. Any person who has been found not guilty by reason of insanity of any felony.

5. Any person who has been determined to be mentally disordered sex offender.

6. Any person adjudged addicted or in danger of becoming addicted to narcotics, convicted and committed to a state institution as   proved in Section 3051 of the Welfare & Institutions Code.

1031.     Each class of public officers or employees declared by law to be peace officers shall meet all of the following minimum standards:

(a)    Be a citizen of the U.S or a permanent resident alien who is eligible for and has applied for citizenship, except as provided in Section 2267 of the Vehicle Code

(c)    Be   fingerprinted for purposes of search of local, state, and national fingerprint files to disclose a criminal record

(d)    Be of good moral character, as determined by a thorough background investigation

In addition to the automatic disqualifiers defined by P.O.S.T., the following are potential areas of disqualification from Woodland Police Department:

Criminal History - The Woodland Police Department requires that all officers, and employees who have access to confidential records be free from felony convictions. Misdemeanor and infraction convictions are handle on a case-by-case basis. Convictions for crimes that indicate a lack of moral or ethical standing will be grounds for immediate disqualification.

Drug Use - Instances of drug use are evaluated on a case-by-case basis. Depending upon the substance, circumstances, frequency, and amount of time elapsed since the last use, applicants may be considered for employment.

For additional information please consider this list of attributes expected of police officers: 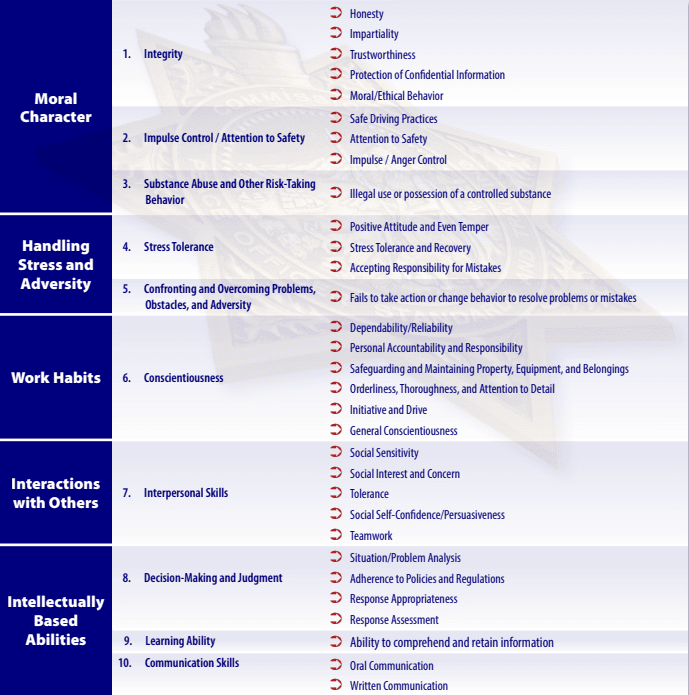