A special thank you to David Wilkinson and Rolf Frankenbach of the Woodland Tree Foundation (www.woodlandtree.org) for the following Landmark Tree historical narratives.

The iconic American elm (Ulmus americana) located at 420 Third Street is one of the few remaining historical American elms whose upper limbs were not “topped” by the city years ago. This tree is likely a century old and has a 62.1” diameter. It has retained its renowned and iconic spreading canopy. A beloved American tree, noted for its toughness and dappling shade, it was widely planted throughout U.S. cities until Dutch elm disease (DED) destroyed millions of elms beginning in the 1930s.

The few remaining American elms checkering Woodland streets are truly survivors. These trees were widely planted in Woodland in the nineteenth century and early twentieth century and valued for their tremendous shade properties and hardiness. By the 1930s, however, Woodland’s elms became infested with the elm leaf beetle, whose larvae feast on the leaves, denuding the tree of its canopy. According to city records, in 1936 when Woodland began spraying to control the elm leaf beetle there were about 650 elms in Woodland. 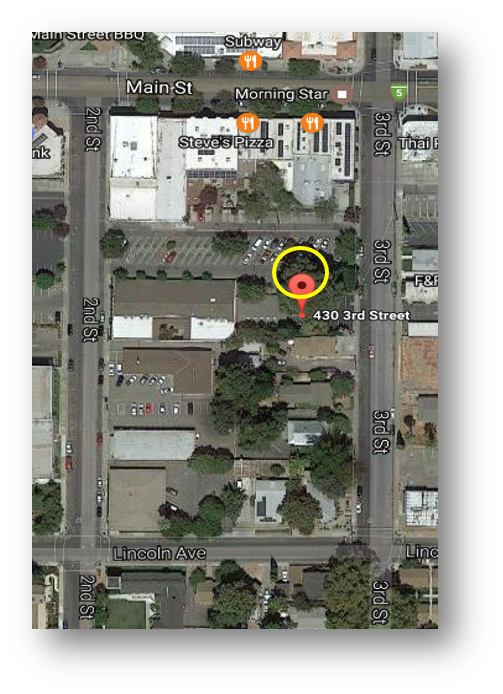 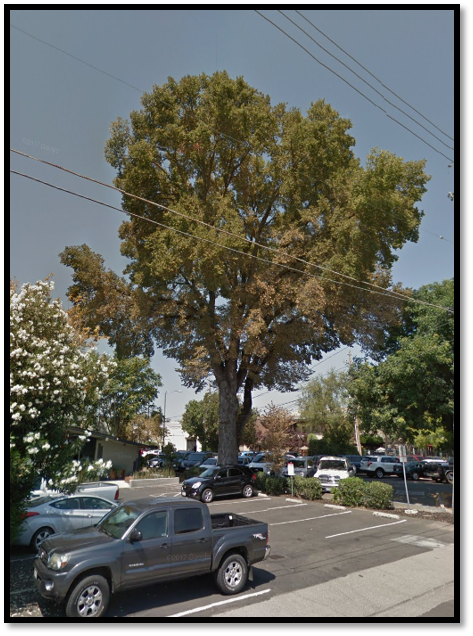 Eighty years later, there are only 75 American elm street trees cared for by the city, with a handful of others dotting private residences in the core area. Most of these trees are in decline due to their age and structural issues related to the tree topping, which weakened upper branches. One reason American elms fell out of favor as a street tree was the fear of DED infecting the elms. Consequently, few (if any) American elms were planted in Woodland after the 1930s. Fortunately, DED has never infected any of Woodland’s American elms. However, many were removed in the late twentieth century when Woodland embarked on road widening projects in the older section of town. Entire city blocks were left devoid of shade.

In recent years the Woodland Tree Foundation and city have planted hybrid Asian elms to reintroduce this valuable tree species to Woodland. And, today, disease-resistant American elms are once again being planted in the country. Landmarking the American elm at 420 Third Street will honor the most iconic historical shade tree planted in Woodland and explain the reasons for its disappearance. Honoring this regal tree will also serve as a bridge between the eras when this elm was widely planted and valued for its canopy and efforts being made today to reintroduce disease-resistant Ulmas americana to the American landscape. 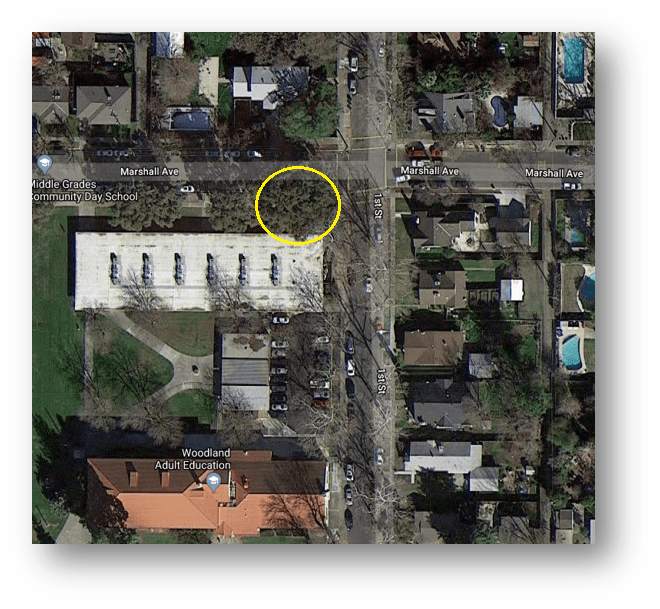 Cork Oak (located in the planting strip on the southwest corner) 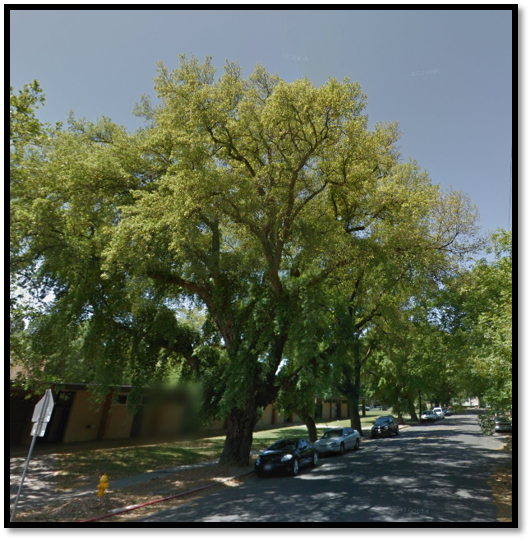 The Cork Oak (Quercus suber) located in the planting strip on the southwest corner of First Street and Marshall Ave appears to be very old with a 61.1” diameter. It may have been planted at the time when Hesperian College moved from downtown in the 1890s to this location (see city historic marker placed along College Street, near Marshall Ave.). This site eventually became Woodland’s first public high school. There are a significant number of cork oaks in Woodland, as they are well adapted to the local climate. 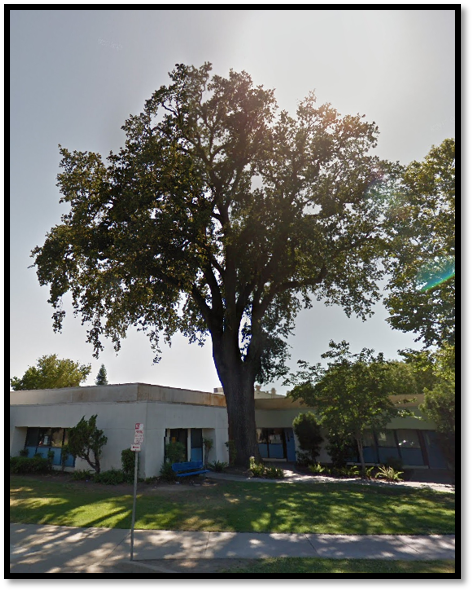 The valley oak (Quercus lobata) located at Lee Middle School adjacent to the school building, about 200 feet south of the intersection of West and Lincoln Street, is a very large specimen tree, with a diameter (at breast height – DBH) measuring 72.9 inches in October 2018. This is the fourth-largest diameter tree in Woodland. This tree is in good health and has been tastefully pruned by the Woodland School District and remains an aesthetically pleasing tree. Its location on public school property makes it a good candidate for imparting an appreciation of native trees by Lee Middle School students. 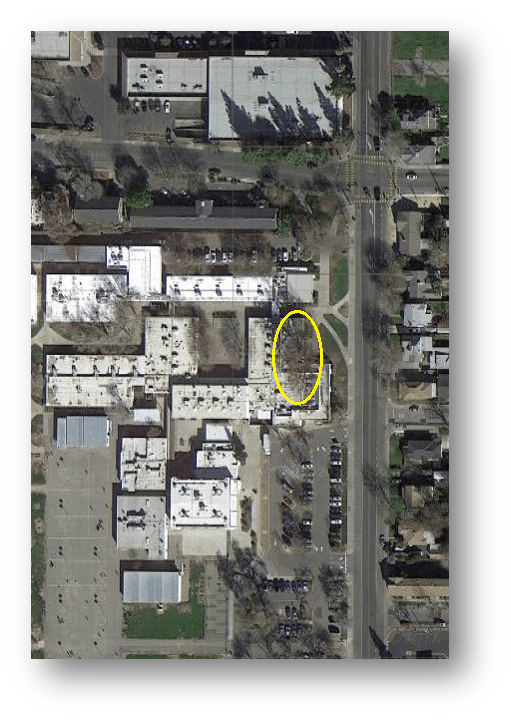 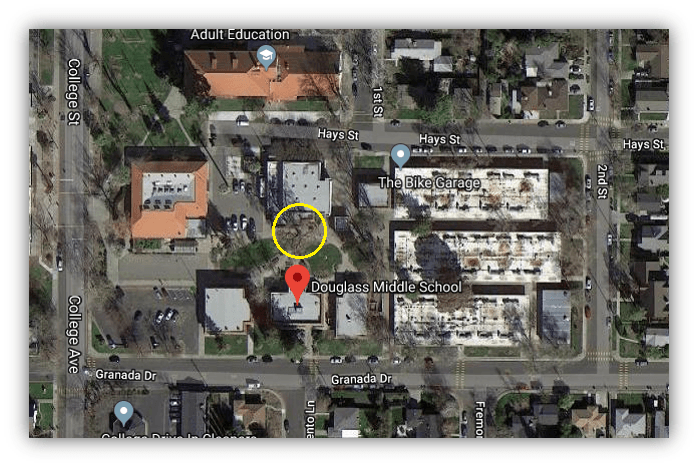 The valley oak located at Douglass Middle School, just south of the gymnasium, has a diameter at breast height of 51.3". Though it is quite smaller than the tree at Lee Middle school, it is an aesthetically pleasing tree that with continued good care by Woodland School District it will continue to grow and thrive and yield benefits for many more decades (perhaps even many generations), including cooling from shade and resulting energy savings, air pollution migration, food and habitat for native scrub jays, storm water attenuation, and beauty. 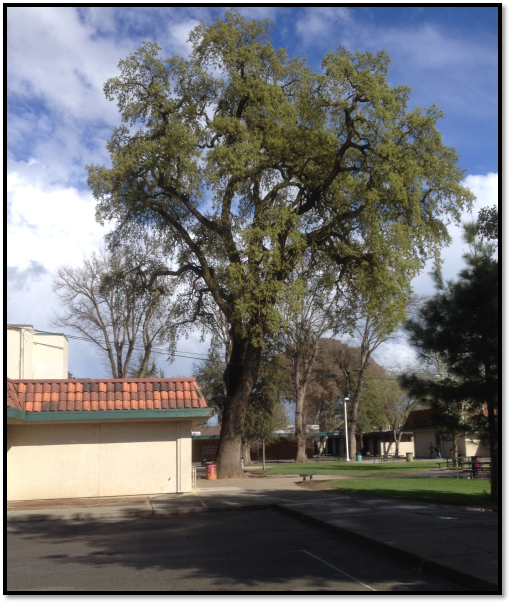 It will also serve as an example of our native Sacramento Valley natural history, which by its mere presence will be noticed and appreciated by current and future Douglass Middle School students. Some of these students might perhaps be inspired by this tree and develop interest in working to preserve native trees, or trees in general, or work in other areas of natural resource management. 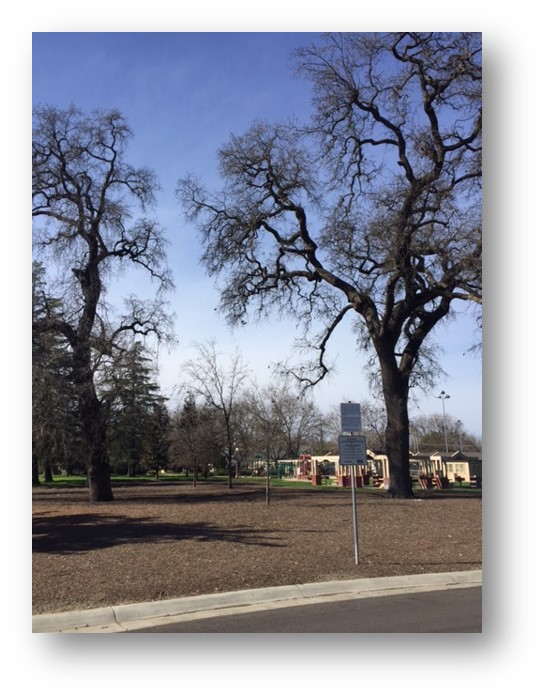 The two large native Valley Oak trees located at Beamer Park were saved only because the park was built around them. Once upon a time, Beamer Park had an abundance of native oaks that were used as a marketing tool for the rustic housing enclave, but they have all since disappeared, greatly altering the skyline and appearance of this historic housing tract. 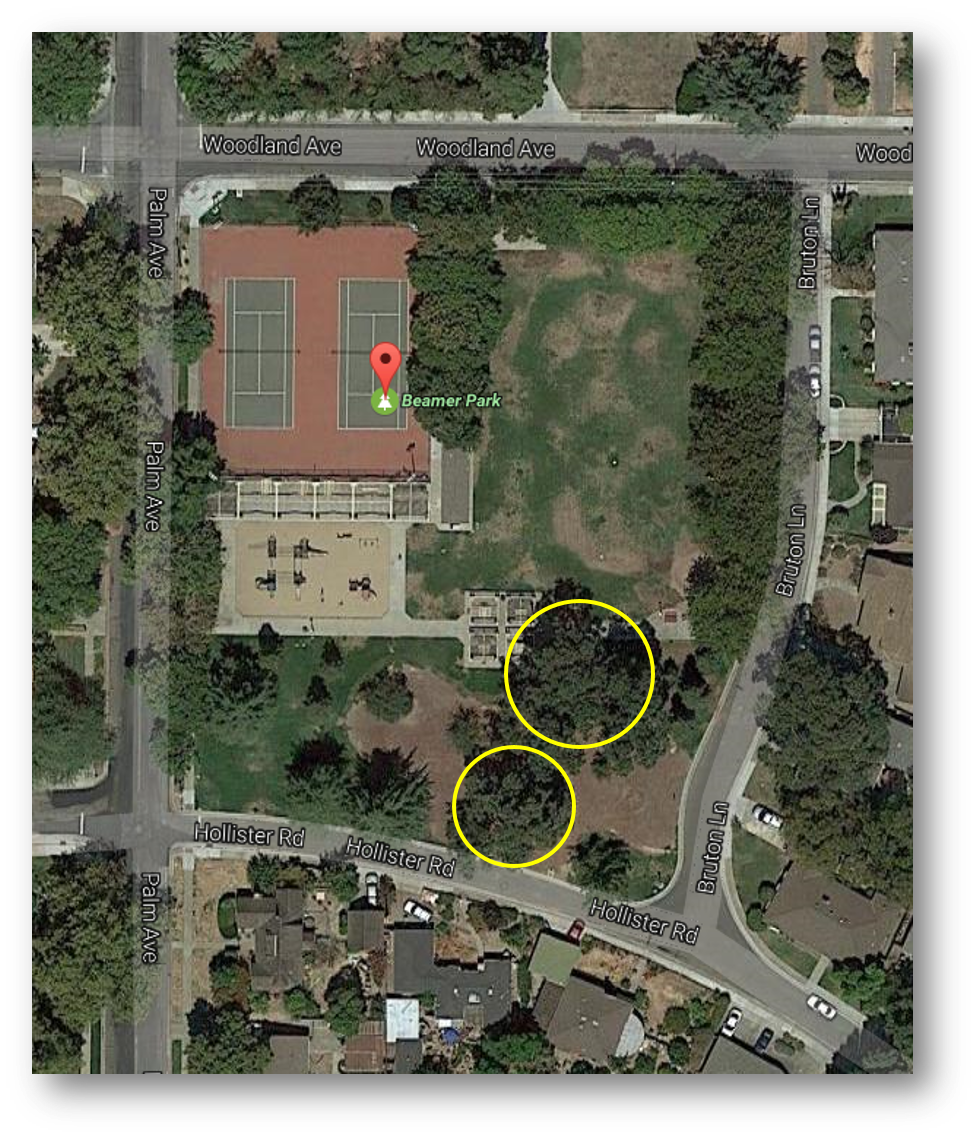 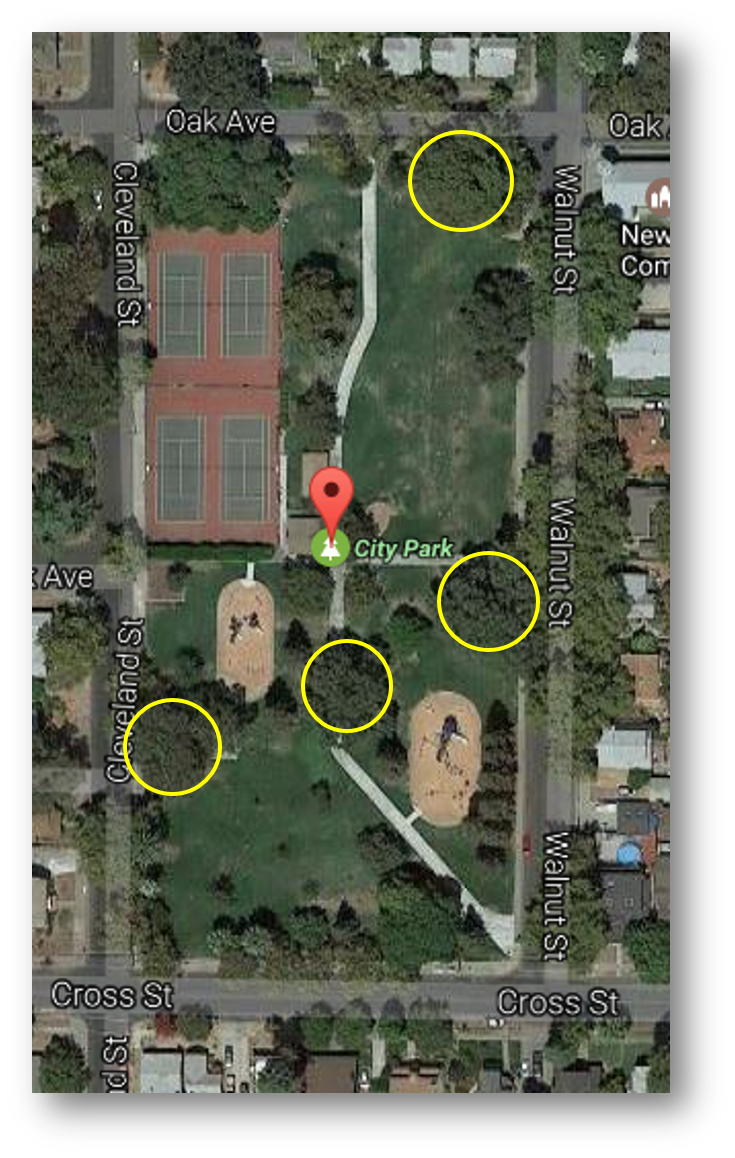 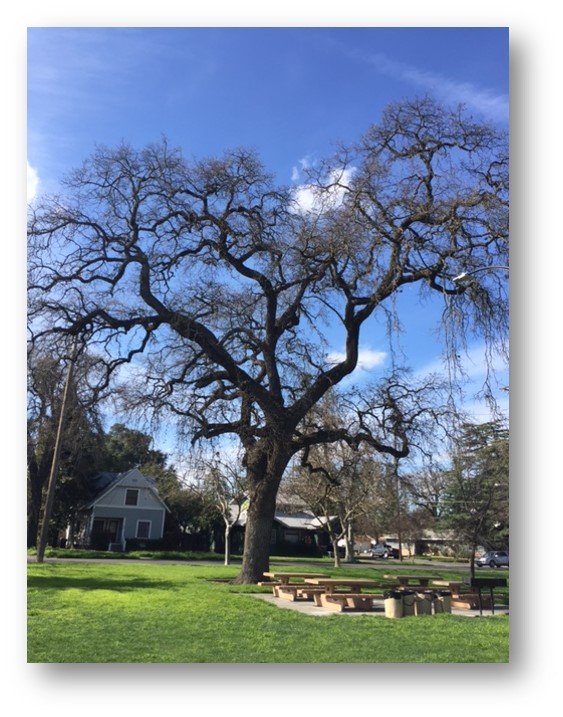 The two large native Valley Oak trees located at City Park are located on different edges of the park near Walnut Street and Elm Street. 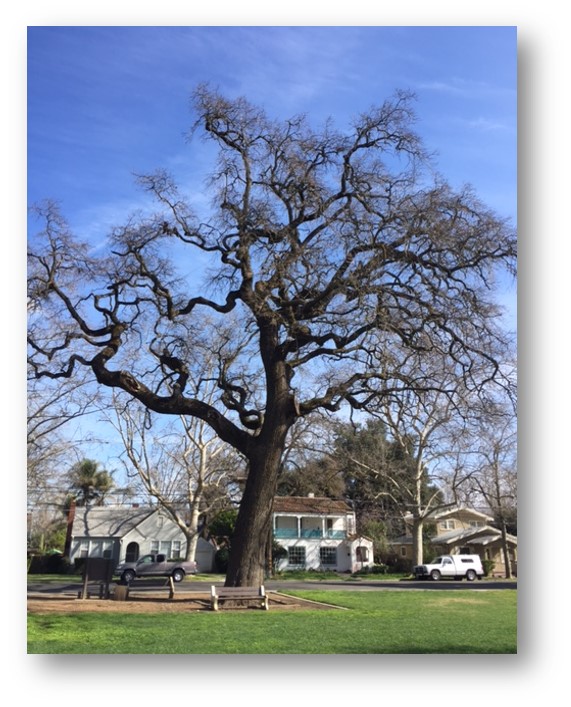 This is Woodland’s oldest city park. The Women’s Improvement Club raised money to buy the land, which was donated to the city for the public park with explicit instructions to preserve the native oaks growing within its boundaries.  A few have survived to the present day. 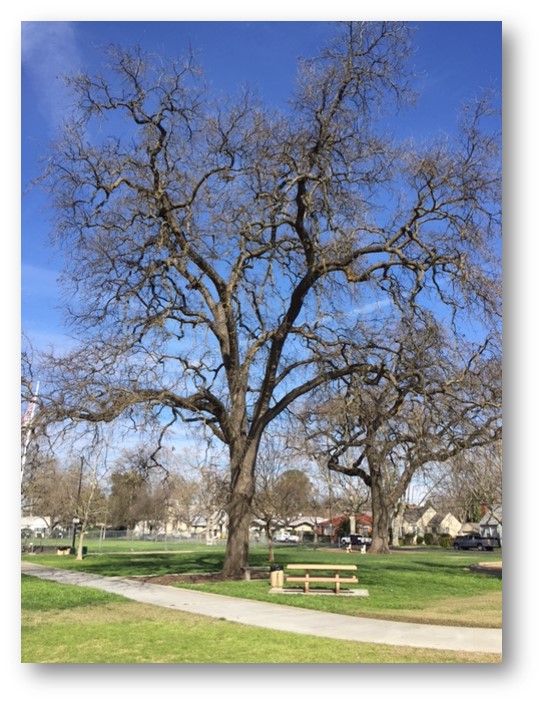 “As this tree develops, may it teach us the lesson of its kind—the sturdy qualities, the glory of facing the storms and, having faced them, stand ready to face as many more…and may all those who will enjoy the comfort of this seat and, in the coming years, the sheltering shade of this oak…honor Shakespeare’s memory and be reminded that even a little candle may throw its beams afar.” 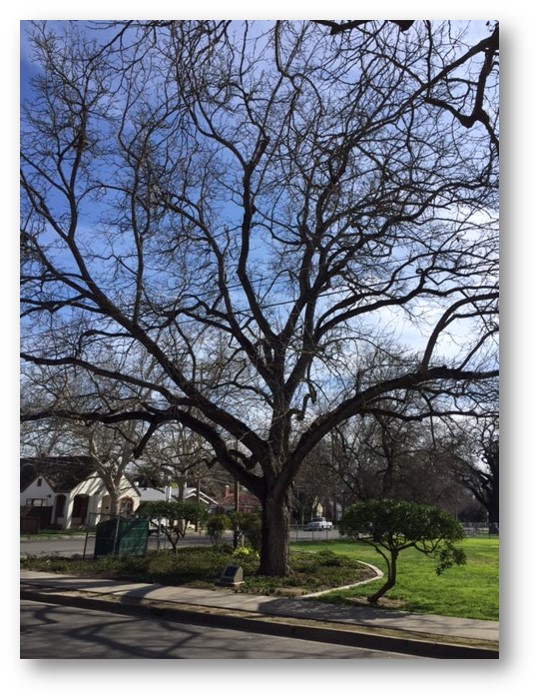 Paradox Walnut tree growing on the S/W comer Oak/Walnut streets at City Park was donated to the community by eminent horticulturalist, Luther Burbank, for Arbor Day 1925. It is a beautiful specimen of a tree which he hybridized.

In 1904 in Woodland there were two prominent community plantings of palm trees, which have survived to the present. After a deeply poetic Arbor Day address given by Congregational Church minister Rev. C. Calvert Smoot at the armory, which was “profusely decorated in flags and bunting,” people congregated at the Woodland Cemetery where a line of Canary Island date palms were planted along the north border of the burial ground; the north border was evidently expanded over time since today the line of palms are buffered by other graves located between Cross Street and the old northern border. 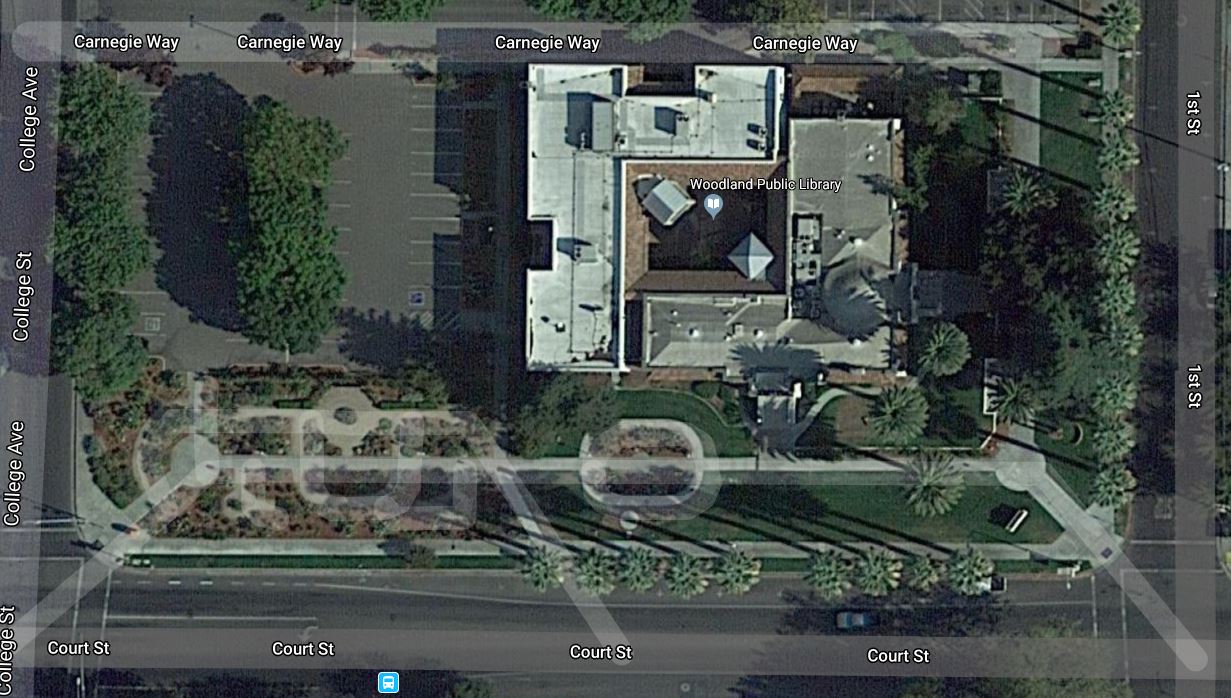 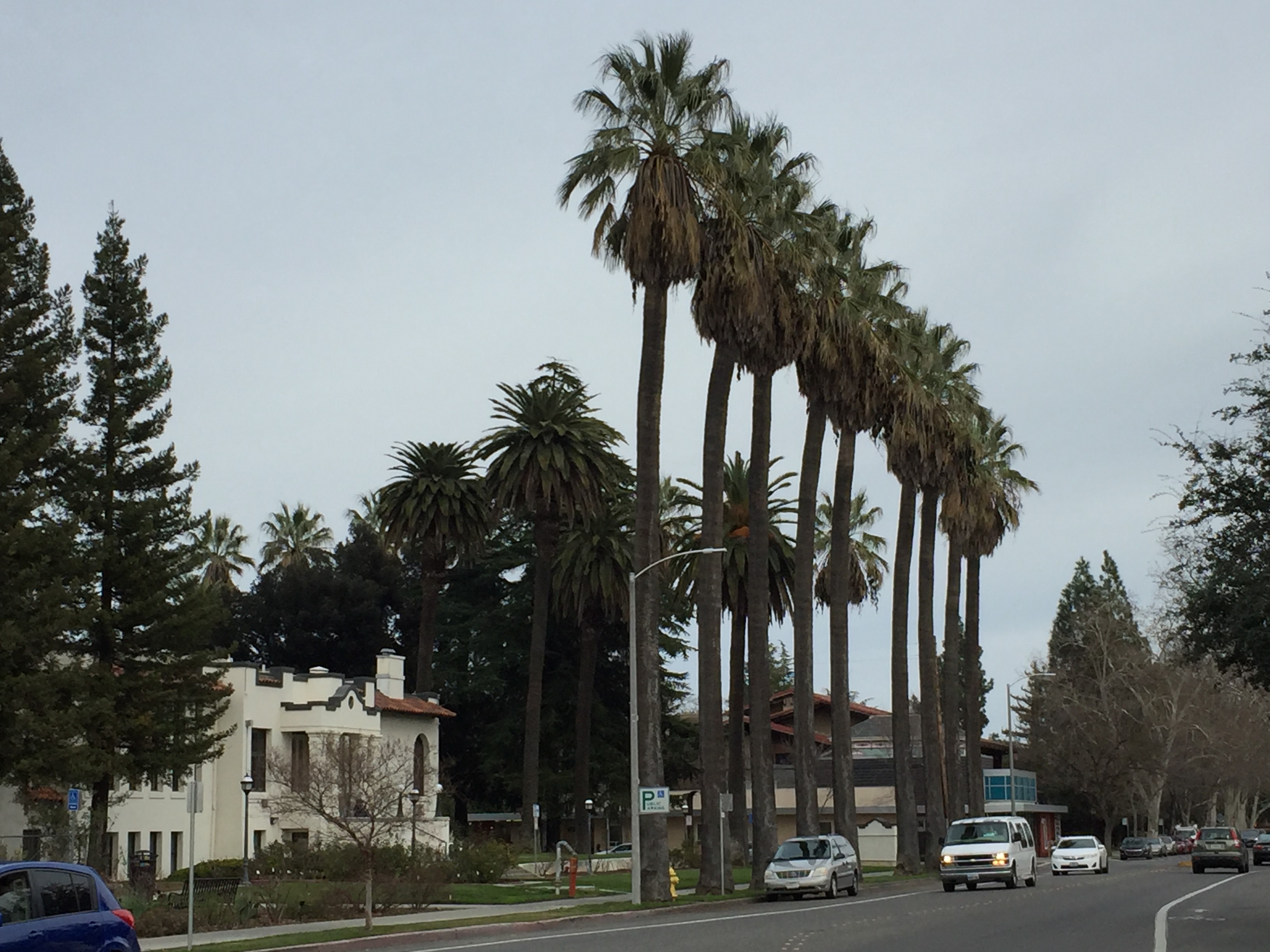 Three months after the 1904 Arbor Day event, Mayor Richard H. Beamer (1849-1916) personally purchased and supervised the planting of the Canary Island date palms rising majestically in front of the Woodland Public Library. California fan palms were added in the planting strips bordering the library on First and Court streets shortly after the library was constructed in 1905.

Mayor Beamer has presented the library trustees with 26 California palm trees. The trees arrived from Los Angeles several days ago and were conveyed to the new Carnegie library site Monday, where they will be used to beautify the grounds. The mayor deserves the thanks of the entire community for his splendid gift.

Beamer’s palm landscape was known as “Library Park.” The Canary Island palms have grown tall and gracefully sway in the seasonal breezes, are evergreen, and complement the Mission Revival style architecture of the library, inspired by the romance of Spanish California. Calling the palms “his monuments,” Mayor Beamer personally cared for the palms until they were established. Richard H. Beamer left a legacy of trees. A highly accomplished public figure and businessman, Beamer loved planting trees as his “hobby.” Beamer’s beloved palms at the library and along Palm Avenue in Beamer Park live on. In 2005 the Woodland city council designated the Canary Island palms at the library “landmark trees” based upon their historical significance.

On the day of Beamer’s funeral in 1916 all banks in Woodland and many businesses closed between 11AM to 2 PM in his honor. The Mail of Woodland called Richard H. Beamer “The best loved man in Woodland.”